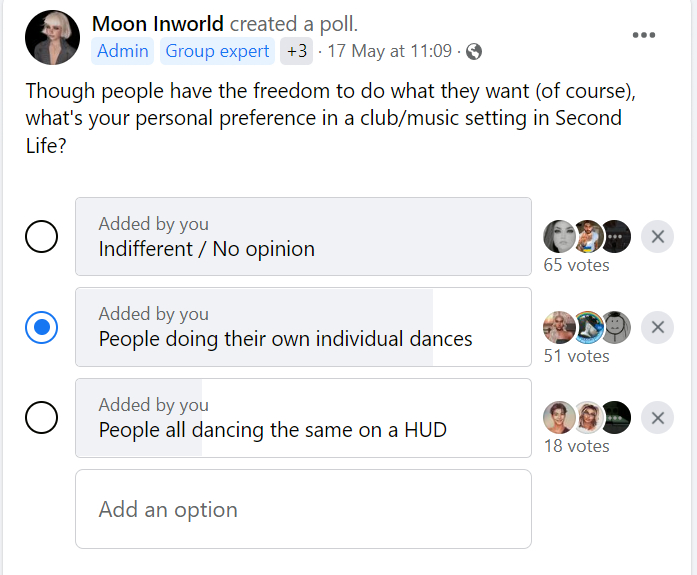 In the old days of SL clubbing, I use to enjoy watching other people dance to see what moves they’d do, and I liked choosing my own dances to express myself. These days, however, if I pop into a random club I often find every avatar controlled by a single person on a HUD, or the crowd is divided into little sub-groups also controlled by a person.

I know I talk like an old person when I say this but back in my day (I started in 2007) we did our own dances in clubs. We chose our own animations – and we liked it! 😝

Yes, sync dancing existed even back in the dinosaur days, but it was usually used to put on a show or to line dance. Some people at clubs did it too, but none that I went to.

In general, if people weren’t doing couple dances, they usually chose their own. Even noobs who didn’t own dances could express themselves because there was always a dance ball with a variety of animations in it. In some places, you could even click the floor to bring up a menu!

New people who never experienced the old way may think sync dancing is how it’s always been, while others are just indifferent. I get it. We all have different tastes, and some even prefer being on a HUD. It’s totally ok to have a different view on this.

Truth is, I’ve never had good experiences with dance HUDs. One time I showed up to hear a DJ and the hostess sent me an invite to join her dance. I clicked the popup menu off because I wanted to do my own dances but soon received an angry message asking if I had some problem with her. Of course, I didn’t, and I had no idea why she would ask such a thing. Apparently, she thought I didn’t like her because I didn’t dance on her HUD.

I looked around that night and saw that literally, everyone danced on this woman’s HUD. She controlled the DJ and the crowd too. They all did her favorite move too, this sex-style slap my partner’s ass dance.

After this experience, I winced every time I went somewhere with a hostess sending dance invites. They rarely asked in chat but would send the menu for me to accept or reject. I knew if I accepted it to “go with the flow” I’d feel slightly resentful at having to conform but, on the other hand, if I said no I’d have this nagging worry that I might offend someone. It was easier to stop attending.

Not only do I not like someone else controlling my avatar, but I don’t like the way sync dancing looks. If real humans dance side by side no two move exactly alike and there’s always something slightly different even with people dancing in step. Avatars aren’t like this. Put them in sync and they look robotic and computerized.

I know after reading this some will say things like “We have both HUD and single dances at our club,” or “People always have the choice of either, and we don’t pressure them.” Those saying this are usually sincere, and I’m certainly all for choice when it comes to dancing. There’s no right or wrong way to do it, and I’m not telling anyone else how to live their Second Life. I just personally dislike sync dancing and tend to avoid places where doing the same dance is the norm.

Out of curiosity, I did an informal survey in a Facebook group I run. The featured image is a current screenshot of that. Note: The survey is still running so the results could change! No, it’s not scientific so should be taken with a grain of salt, but it gives a small idea of the mindset some have about sync dancing in a club setting.

As you can see, most are completely indifferent about this. Of the people who do have an opinion though – and I was surprised about this – the majority agree with me and prefer that people do individual dances.

I’m not writing this to change anyone, just to give food for thought; also to let others who are not into the whole sync dance thing know they’re not alone. I mean no offense toward the lovely people who like to dance together like this. Many enjoy it, and I’m all for people doing want they want to do in Second Life.

On that note, I’ll leave you with an old video of dancing that I do like to watch…