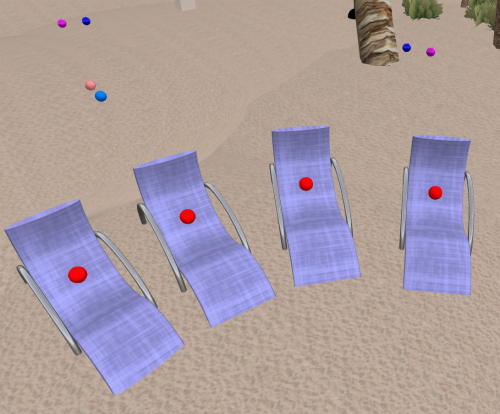 When I joined Second Life in 2007 I noticed there were these little balls everywhere I went, and if I right-clicked and sat on one I would dance, sit, or become involved in some kind of movement/animation. The little balls looked weird at first, but I stopped noticing them after a while.

We do not see poseballs much anymore. Creators put animations inside furniture now because it looks better.

And yet, now and then I’ll run across a place that looks like it hasn’t been touched since 2007. Someone is still paying for the land, but the owners have either abandoned it or never left their own area to see that the rest of the virtual world has moved on.

Even so, it’s nostalgic. If Second Life continues over the years, perhaps poseballs will be like antique collectibles. We laugh at them now, but will we regret it one day? Will poseballs become a collector’s item?