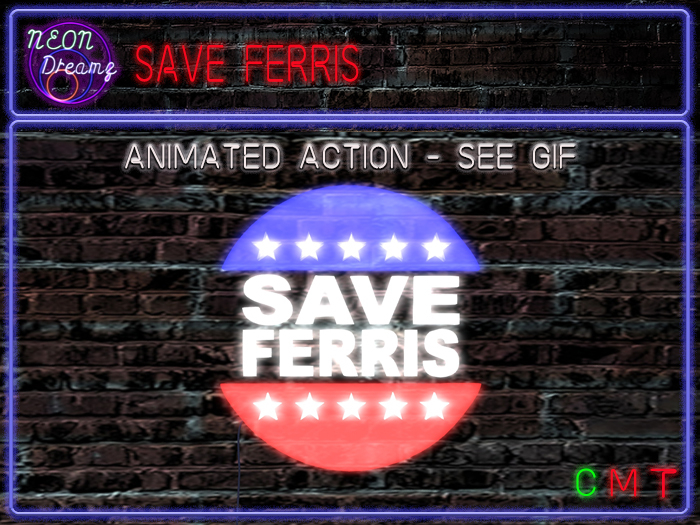 Every Friday I play new wave, synthpop, and 80s alternative in a club I have in the sky. It’s not an official event. I don’t send notices out or try to recruit people to be there, and I could care less if anyone turns up apart from a couple of my BFFs. Friday for me is being a kid again, having a party, and cranking out tunes.

Since I only play music from the late 1970s to 1989 that’s also the decor. Gary Numan, Billy Idol, Blondie, Beastie Boys, Prince, and the Pet Shop Boys decorate the walls. There’s also Johnny and his friends from Cobra Kai in Halloween skull costumes, and a poster seeking some “lost boys” last seen in Santa Carla, California.

Last week I made an off-the-cuff remark that what the place lacked was a “Save Ferris” sign, like the kind seen in the 80s cult classic Ferris Beuller’s Day Off. Hey, it’s not my favorite film or anything, but I’d be lying if I said I couldn’t relate to a suburban kid who cut school to go run around downtown Chicago.

Well, it so happens my friend Seren actually listens to some of the silly stuff I say, and the next time I saw her she presented me with a present; a neon sign that said Save Ferris!

Hey, it’s not just for me though. It’s also available in her store Neon Dreamz, so if you have an 80s club or just like Generation X nostalgia, what are you waiting for? Go get yourself a Save Ferris sign!

Note: I searched Save Ferris on Youtube hoping to find scenes in the movie that showed the sign, but instead a band kept coming up. Annoying. I do have to give them credit for choosing a great name to get attention though. Calling your group Save Ferris is a step up from naming yourself Free Beer.

Upgrade Your Avatar to Mesh But Stay Yourself - For Just 2L
2009: A Day in Second Life
Moonletters To Take On Writers?

1 thought on “Save Ferris”