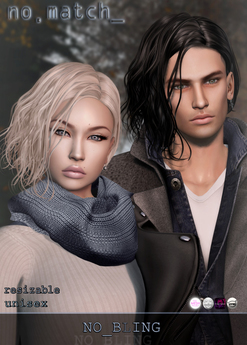 While wandering around N0match I noticed most of their vendors featured both a man and a woman wearing the hair. How clever, I thought, and it made me miss the old days of Second Life when I could put on a man’s outfit with no problem.

First, let me say this. I’m happy being female and I don’t actually want to look like a man. However, I have grown increasingly unhappy with women’s clothing in SL which sexualizes the avatar wearing it. Yes, I want to be edgy and rock, I just don’t want my bits on display.

I’ve heard some guys say women have more choices for clothes in SL, but this is not entirely true. Creators might make more stuff for women but at least the stuff men do have is actual clothing.

I’ve only seen one unisex clothing store since mesh, and it was really geared to guys who wanted to wear feminine stuff. Outfits came in both male and female shapes. If you were a man you could wear it without gaining breasts, and if you were a woman you didn’t have to lose yours! I liked a lot of what I saw, but they were expensive, and I couldn’t justify paying that much for clothes.

I know creators have their hands full with new bodies coming out, and people wanting new clothes for those bodies. And here I am talking about making clothes in the same style for both men and women. Hey, I don’t want to add to anyone’s stress, just throwing the idea out there. So long as it isn’t unaffordable to the general population, a unisex clothing store might possibly find a niche market.