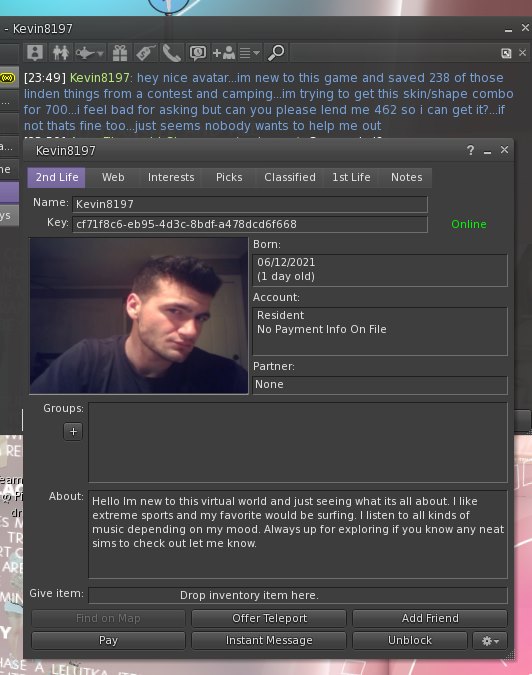 Have you ever been Kevined? I asked this on Facebook and had over 100 people put their hands up to claim they had.

Who is Kevin? Not sure really, but he’s been “new” in Second Life for years now, has multiple accounts, and just wants us to lend him “462 of those linden things”!

“Poor Kevin is new to this game and has been trying for years to get this skin/shape combo for 700. All he wants is someone to lend him 462 of those Linden Things so he can get it. Just seems nobody wants to help him out,” the advert reads. “But now YOU can! Here’s a stack of 462 Linden Things in cold, hard L$ currency notes. You can send it to Kevin when he strikes. Go fund Kevin!”

Not everyone is amused by Kevin, though. One woman said talking to him or about him gives him the attention he wants and the only thing we should be doing is reporting and blocking him immediately. Maybe she’s right, but I’d rather see the humor in it. I’ll laugh – then block him.

PHOTO CREDIT: Thanks to AuraRose Fitzgerald for allowing me to use her screenshot of being “Kevined.”

Great Looking Mesh Car For 1L
When People Disguise Themselves As Alts
What Do You Value in a Friendship?